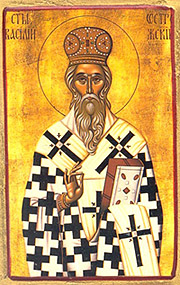 He was Bishop of Zahumlje in Herzegovina. He was born in Popovo Selo, Herzegovina on December 12, 1610, and became a monk at the Monastery of the Dormition Tvrdoš near Trebinje.

His modesty forbidding him to push himself forward to occupy the high positions his piety and capabilities recommended him for, he was elected as Bishop of Zahumlje and Skenderia against his will.

After his death in 1671 he was buried at the Ostrog Monastery he had founded in Montenegro, and his tomb in a cave-church soon became a site of pilgrimage for Christians (both Orthodox and Roman-Catholic) and Muslims drawn by reports of miracles occurring through the intercession of the saint. The Monastery of Ostrog is now one of the major pilgrimage sites in the Balkans, and large numbers of pilgrims gather particularly at Pentecost. St. Basil of Ostrog is commemorated in the Serbian orthodox liturgical calendar on April 29.